Make sure to always use newest botversion!

Update versions 3.0.3.750 or later simply by running fBX Updater (need to do this one time only).

You will see ‘Update fBX’ turning red once an update is available, so you can not miss any

2) Click on Update fBX showing in your bot menu:

The fbx-updater popup shows your current version and the available version: 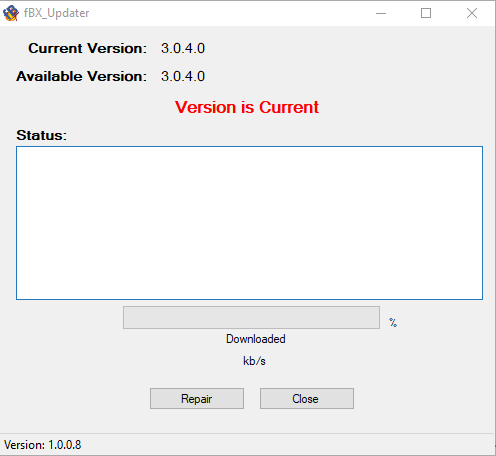 4) If your version is not current, hit update.

If you did not close bot yet, a popup will ask you to exit, do so, then proceed with updating your bot.

If you run into problems, remember to stop your Antivirus while updating. Once the update is done, turn it on again. Better: Set exceptions for the whole facebot Extreme folder in your Antivirus, then you don’t need to bother with that again.

If all worked out, lower left corner of bot now should show correct Version:

Win XP/Vista Users: Bot Versions 3.0.3.4 and higher are no longer supporting Win XP and Win Vista. The updater won’t update if it detects old Win versions. Win XP is no longer supported by most other software either, but for security reasons it is strongly recommended to update your windows (and bot) as soon as possible.
Win 7 Users: Make sure you have all current Win Updates, bot requires at least Service Pack 1 (run your Win Updater until it finds nothing more).

If you still have a very old bot (3.0.3.6) and NO Update fBX in menu showing just download and install basic install version 3.0.4.0 from here

If your bot does NOT open after an update, most likely the updater did not detect Visual C++ properly, don’t worry though. Just download and run this file http://updates.facebot.org/radical3/vcredist_x86_2015.exe and then your bot should work just fine.

Version for old bot (only use with Win XP/Vista): http://updates.facebot.org/radical3/vcredist_x86_2013.exe

Other current errors users experience are listed on troubleshooting page along with fixes!