This plugin basically puts all animals and trees from GB in their intended buildings, whether they are locked for specific farm or not. it will search out the builds on farm and display how many of what has been detected.
in the current version we get option to either
1) put items in same build
or
2) put one item per build
AND
3) for builds like coop/stable/nursery, where only number is limited per farm,
PLUS
4) orchard has been added, along with other breeding pens
5) to add any item from GB in the code box, simply click on its picture, as many times as needed in number
6) in NORMAL mode, to add buildId number(s) in the designated box, just click on the picture(s) of the chosen building(s)
7) when not using zStore or 1 each, items can be unLocked in multiple ids as per chosen, such that plugin will fill them to max capacity, and then automatically move on to the next given id when the previous is filled.

In zStore we need to put in number box the ‘zStore#’ which gets displayed in the left column of the Farmbuilding list. all item in GB n building on farm will be displayed as per last update of farm info 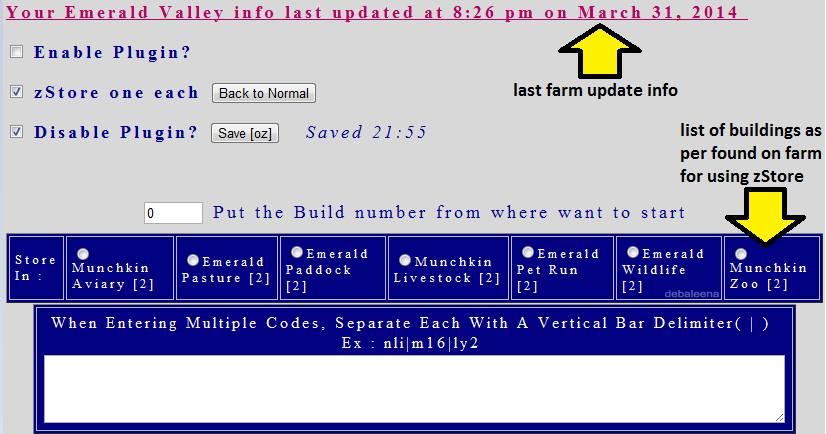 When enabled, zStore will put one each in consecutive builds of the chosen type starting from the build with zStore# we put in the number box.

In ‘normal’ mode, we can simply click on the buildings which we choose to store items in, single or multiple, and choose all items that need to be put. choose the type of building where to put item in, and show items in GB – animal or tree from the dropdown menu

When run that way, will put all chosen items in the buildings, starting from the first, and when that gets filled, will automatically start unLocking in the next build chosen

p.s. plugin does not ‘create’ items to unLock, it unLocks existing items from GB to pens

if for any build the original is not detected, example, nursery barn, to unlock in coordinated build for the animal, like in this case will be playpen.

locked items when unlocked in builds, cannot b put in storage or on farm’s surface where it is not meant to be, to remove them, use separate build, example, if you have put locked horses in stable, first transfer them in paddock, then either keep, or delete the paddock with the ‘locked’ horse inside